Suicide is the 10th leading cause of death in the US for all ages. (CDC)

There is one death by suicide in the US every 12 minutes. (CDC)

Suicide takes the lives of over 38,000 Americans every year. (CDC)

The highest suicide rates in the US are among Whites, American Indians and Alaska Natives.
Only half of all Americans experiencing an episode of major depression receive treatment. (NAMI)

80% -90% of people that seek treatment for depression are treated successfully using therapy and/or medication. (TAPS study)

There is one suicide for every estimated 25 suicide attempts. (CDC)

There is one suicide for every estimated 4 suicide attempts in the elderly. (CDC) 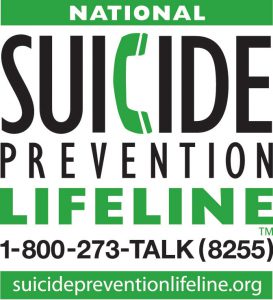